President Clinton – The President Is Missing Book – At BookCon

THE PRESIDENT IS MISSING
By Bill Clinton and James Patterson

– Threats against the Saudi king, malicious Russian meddling in world affairs — than its main story line of a president who ditches his handlers and goes rogue from the White House, convinced he is the only one who can foil a huge cyberterror plot.
Bill Clinton was elected President of the United States in 1992, and he served until 2001. After leaving the White House, he established the Clinton Foundation, which helps improve global health, increase opportunity for girls and women, reduce childhood obesity and preventable diseases, create economic opportunity and growth, and address the effects of climate change. He is the author of a number of nonfiction works, including My Life, which was a #1 international bestseller. This is his first novel.
James Patterson received the Literarian Award for Outstanding Service to the American Literary Community from the National Book Foundation. He holds the Guinness World Record for the most #1 New York Times bestsellers, and his books have sold more than 375 million copies worldwide. 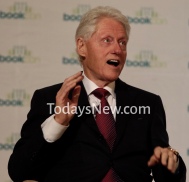